Allowing the students the opportunity to write a rap song influenced what themes came up for students. It was relevant to me as I saw students reference prior knowledge of the themes that come up in rap music that this genre was influencing what came to mind for students. This showed me that students are capable of referencing prior knowledge in a genre in which they are familiar. Activating prior knowledge has been difficult for me in my teaching as students read the assigned anthology and try to connect to characters whose lives are so different from there own. I think many students experience a feeling of contradiction as they are told to relate to experiences far from their own and are then shown and told that what they experience is not valid prior knowledge or devalued prior knowledge. These students automatically drew from the influenced of gangsta rappers and turf signs that they see everyday. They imitated the language patterns, sounds, and spellings of there community. Many of the themes touched on in these lyrics are powerful and relevant to growing up in this low income neighborhood plagued by poverty and violence yet filled with the hope that allows disenfranchised communities to continue to believe in their ability to overcome. If I had the time to solidify the feeling of community in this group and a since of trust, I would explore what topics emerge as we try different genres of writing. However CST’s are rapidly approaching an every extra minute will be dedicated to test preparation.

Of the themes that emerged in these lyrics only 2 would be considered content knowledge according to standards. Both of those references had to do with mathematics. One verse included knowledge of place value and use of correctly written numbers in relation to money. The other was a reference to multiplication. All of these students had issues in there minds that were not simply solved by knowing California State Standards. However, I understand that it is knowledge of these standards that would help provide them a means to deal with and understand the larger issues that they face. The problem is the disconnect currently in education that empowers students to understand that education can be an agent to free them from some of the harder things they are accustomed too. However, it also asks them to reject the very place that nurtured them, their own neighborhoods and essentially their own neighbors and friends. Because education systems today almost forbid teachers to discuss these real themes students are not able to bridge the wide conceptual gap between where they are and where they are going. This leaves them struggling to understand that even if they go somewhere else a bridge works both ways.

Since beginning this project I have had 3 impromptu student initiated lunches with groups or 3 to 7 students. These sessions have included students utilizing skills they learned during this class. Students spent time searching for beats and retyping and discussing their lyrics. Students preformed dances for me and began to discuss their real feelings toward learning at my school site. I have even had one student to adopt me as her “mama”. These students are Latino and African American, they are boys and girls. They confide in me the things they go through on the campus and at home. I never asked and I never inquired. I simple allowed myself to open to hearing them in a way a never had before. I allowed for expression in a genre familiar to them in a classroom context and somehow for them that gave me privilege into a different space in the school. It allowed me to be a colleague of my students. It allowed me to learn from them as they taught me the meaning of much of the slang they use. I still remain teacher at all times but I am a different kind of teacher to them and to myself as a result of this project. 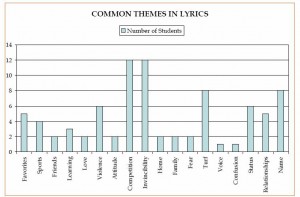 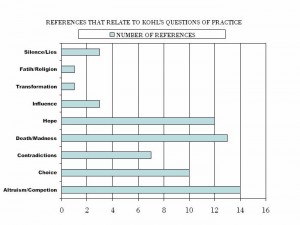